A Song in Our Hearts

Last week, Song-Felicity had her first appointment with her pediatric cardiologist. Her oldest sister and I loaded her up in the morning and headed to his office. I was somewhat anxious…partly because I am not much of a medical mama and the language alone can overwhelm me. But also because I knew that Song-Felicity had not been seen by a cardiologist since she was released from the hospital in China following her open heart surgery nearly two years ago.

The “what ifs” had been haunting me. What if her heart needed more surgical attention? What if she was more fragile than she appears or than we know? Though I know the possibility of future open heart surgeries is a reality with her, what if I would be facing one way sooner than I could imagine? Thoughts hovered over me of my baby being removed from my embrace into an operating room while I labored to swallow fearful tears for hour after hour with medical people explaining to me what was happening in a sterile, medical language that I simply do not speak or understand. I did not know how I would pull myself together enough to endure this yet.

From the moment we entered the exam room, I recognized that Song-Felicity was uneasy. Maybe it was the crinkling of the crisp paper on the examining table. Perhaps it was the smell of rubbing alcohol. But I watched as the concern crept across her face and, within moments of entering the room, she was reaching for me to hold her and clinging tightly to me. I could feel the anxiety in the grasp of her tiny hands.

She would not let me put her down. She clung to me like a desperate spider monkey. The precious cardiologist agreed to examine her in my lap and when we went into a different room for her echocardiogram, the sweet lady conducting it let me hold her throughout that, too. I seated myself on the exam table and backed up to the wall. Song-Felicity was in my lap with her tiny back to my chest. I watched as numerous sticky circles were attached all over her small body covering the now fading scar from two years ago. I held my breath as the lights were turned off and the machine began to peer inside of my daughter’s chest.

The images were another foreign language to me. I could not make sense of any of the shadowy pictures but I watched the face of the woman conducting the procedure paying close attention to whether or not she seemed concerned. She seemed comfortable and that comforted me.

Song-Felicity sucked the thumb of one of her hands and reached back to hold onto me with the other one. She kept looking up at my face as if to make sure I was still there. She began to pucker her lips to kiss me and I returned her kisses with air ones since the way she was situated in my lap prevented me from bending down far enough to actually kiss her tiny lips.

This continued for nearly 20 minutes…the desperate thumb sucking, the repetitive upward glance to make sure I was still there and the sweet air kisses between a mother and her toddler.

And then it hit me.This was the very first time Song-Felicity had been to a heart doctor with a mother….with her mother.

Her heart defect had been discovered shortly after she arrived at the orphanage.She underwent open heart surgery only weeks later. She may have had an orphanage nanny with her, but never her mother. 18 days in a hospital with no mother to comfort her or to worry about her or to study her tiny face for hints of pain or distress. No mother to hold onto with one hand while she sucked the thumb of her other one and no mother to return her precious air kisses.

I knew it then. Deeply. No matter the verdict the shadowy images were waiting to give me, my daughter’s heart was indeed healing…in the way that only the affectionate presence of a mother could heal it. We might be told in moments that her tiny heart needed more surgery but she was beginning to glimpse that she was never going to go into another operating room without her mother keeping prayerful vigil right outside. She was never going to awaken from the grogginess of anesthesia again without my eyes looking into hers and awaiting her sleepy air kisses.

The lights came on and, as my oldest daughter and I dressed Song-Felicity, the verdict of the shadows was delivered. Her doctor reported that her heart looked perfect…for us to return for another check-up next year and to “treat her like a normal kid.” His voice sounded like that of an angel to me!

And he spoke a lovely, lovely language that I CAN understand.
“He heals the brokenhearted and binds up their wounds.” Psalm 147:3 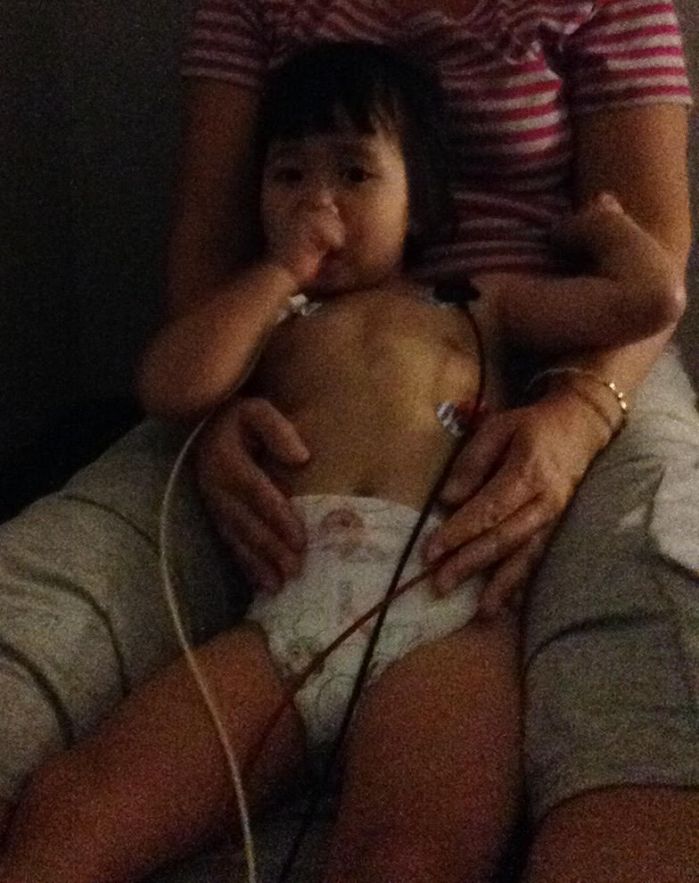