A Song in Our Hearts

Over the past year, our seven-year-old, Crockett, has been pleading with us to let him have a lemonade stand. It has been too hot, too cold or too chaotic to make it happen. But the weather in North Florida is glorious this time of year and we thought it would be good to marry his desire to run a lemonade stand with giving him a sense of contributing to bringing his baby sister home from China. So we decided to help him with a “Stand For Our Sister”. We settled on offering pink lemonade since it is so little girly, fortune cookies because of their association with China and boiled peanuts because she is coming home to be a Southern girl:)

My mother got permission for Crockett to set up his stand at the Kappa Delta sorority house during the Florida State homecoming football game. You would have thought it was Christmas in our house as our little ones anticipated their “Stand Day.”

But it was lots of work. The Friday night before, Jimmy and I were up until 3 a.m. boiling peanuts, filling bottles with little-girl-pink lemonade and bundling fortune cookies. By the time we had the stand and its contents and our four youngest children loaded up and heading toward campus, I was exhausted and, honestly, not really looking forward to an afternoon of shepherding little ones as they ran a lemonade stand. On the way, I silently lifted a prayer asking for a heavenly attitude adjustment and telling the Lord I really needed a dose of energy and encouragement.

So I should not have been surprised at all when Crockett’s first customer of the day approached our stand on his way to the game. He asked Crockett what he was fundraising for and Crockett answered, “We are raising money to adopt my baby sister from China.” Customer # 1 promptly showed us a picture of his four children, three of whom were adopted internationally! He was the heavenly dose of encouragement I had petitioned! It was so beautiful to hear him talk of his children and to see actual evidence that these children really do come home eventually. My heart needed that at that moment.

He ordered a lemonade and a bundle of fortune cookies and handed Crockett a $20 bill. As Crockett looked to us to make change, customer #1 told him that he was a lawyer and not great at math so Crockett should keep the change:) Crockett was so proud of his very first sale! 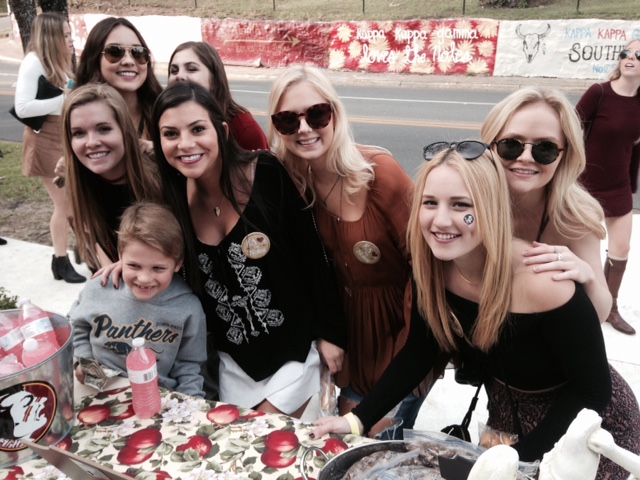 We spent the afternoon watching our children engage with their Stand customers. The college girls particularly gravitated toward my baby boy:) And after an entire afternoon of supervising “the Stand”, we headed home with sleepy children…and their even sleepier parents:)

That evening, Jimmy and I discussed the day. Though the lemonade stand was not particularly profitable, it was absolutely priceless. Our family had come together as a team. Every one of us had participated in the mission. The older ones helped to boil and bag peanuts and our 11 year-old bundled fortune cookies and decorated signs. Even our 4 year old got into it by holding a sign in front of the Stand. We got to spend the day together as a family and Crockett got to see all of us pull together to support something he longed to do. And on top of it all, the Stand offered an avenue for our little ones to have a sense of contributing to bringing their sister home.

As the evening came to an end, my thoughts drifted to our China baby. One day she will see the pictures from her brother’s “Stand For Our Sister” and be able to witness how excited her siblings were to bring her home.. I long for the day there is another Stand for Something in our family…with Song-Felicity gulping lemonade and devouring boiled peanuts right along with us.